Over the River and into the Mamaku

Born in Sao Paulo, Brazil, Annie Smits Sandano has since lived in New Zealand, Italy and the USA and has completed a large portion of the study towards her BFA degree abroad.  She now resides in London, UK.

Having completed her Fine Arts education at Elam School of Fine Arts with Honours, and the prestigious Rhode Island School of Design in the USA, Sandano has had successful exhibitions in New Zealand, Australia and the UK. She merges cultural factors from Brazil and New Zealand; assembling, collating and hybridizing to reconfigure our traditional visual vocabulary.

Sandano’s prints create a narrative of contemporary folklore with references to modern illustration, traditional Japanese woodcut prints and the respective histories of decorative and fine arts in Brazil and New Zealand.

As well as printmaking, Sandano works across a variety of fine art mediums, adamant about upholding traditional fine art practices within a contemporary context.

Following her very popular and highly coveted collection of hand-carved and hand-printed limited edition woodcut prints, in 2014 Sandano began to develop her practice towards original paintings with the exhibition of a series of abstract acrylic paintings which were also very well received and are now finding a place in major collections.

Sandano’s works have been acquired by the Wallace Arts Trust, the Hilton Group and the Deloitte Art Collection to date.

Other recent achievements include having two pieces selected as finalists for the Waikato Society of Arts Waikato Youth Art Awards, and having a piece featured in Prince William and Catherine Duchess of Cambridge’s private collection.  Sandano also featured in Denis Robinson’s publication, ‘New Zealand Gallery’. Highly collectable, and with a strong following, Sandano is fast becoming recognised as a significant contributor to contemporary printmaking and painting in New Zealand. 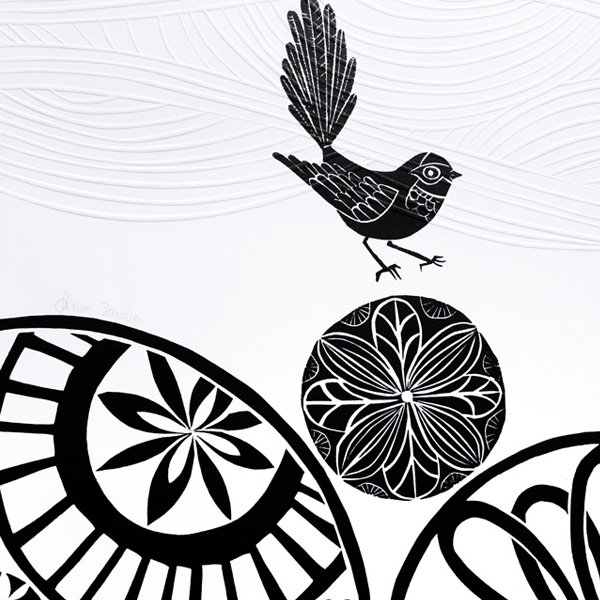 Visit our gallery store to shop limited edition prints by Annie Smits Sandano. Artworks can be purchased online from the store and for orders over $800 shipping is free.