Born in New Zealand in 1945, Brent Wong spent the early part of his life in the capital, moving north to the main commercial centre for a time, before settling on the West Coast.

Brent Wong’s work has variously been described as surrealistic, realist and visionary.  While surrealism and realism may be attributed to certain phases of his work, the artist believes that there is a high level of symbolic content in most of his paintings, reflecting autobiographical material. Over the past twenty years his interest in the meditative nature of the static image has deepened.

A self-taught painter, Wong’s artistic career began in the field of drawing. After brief experimentations with watercolour and oil, he settled on acrylic as his medium of choice. Its quick drying qualities gave him the flexibility to easily apply successive coats of paint and make drastic changes where necessary. He has been known to spend more than three years on a painting before he consented to its public display, adding countless layers of acrylic paint to achieve a jewel-like lustre to his surfaces. This continuous quest of perfection is an enduring part of Wong’s creative pursuits, potentially facilitated by his early tertiary education as a Fine Arts student at the Wellington Polytechnic in 1963.

The expansive view outside his Vivian Street family home in central Wellington captured his attention and prompted the frequent architectural presences and geometric patterns in his earlier paintings. The stretch of rooftops and myriad of residential and office buildings seen from his window are dominant shapes and motifs throughout his oeuvre, but these do not reflect a fixation for nostalgia, instead an instance of Wong using his memory to inhabit the landscape. His early works were initially composed as line drawings of interiors and three-dimensional formations with exaggerated perspectives. Like a stage set, Wong then experimented with proportions and colour.

Many of these constructions stemmed from doodles created during his nightshifts as a copy holder for the Dominion newspaper and became more formalised and coherent when placed within a composition. This sketching was a means of relaxation during the artists serious bouts of depression and anxiety. This is not simply an exercise in architectural drafting or a memento of a significant event or person, but rather a disturbing illustration of displacement and alienation. The subconscious presence of these local buildings inadvertently observed on a daily basis manifested during Wong’s anti-depressant-fuelled automatic writing experiments and were transformed into a symbol for the artist himself.

Initially Wong’s landscapes were purely a base upon which content could be added.  His landscapes were not painted from life or photographs but instead were created in his studio from memory.  The repetitive geometrical patterns of these outlooks allowed Wong to plan his scenes to the nth degree, laying the groundwork to imbue these carefully considered compositions with content and align them with classical painting. Consequently these landscapes may be recognisable as New Zealand landscapes but are not to be interpreted within the realms of New Zealand Regionalism, which was characterised by a focus on place and local identity.  Instead, the landscape is not the centre of attention in Wong’s paintings but rather just the stage upon which action was to be enacted.

While Wong’s earlier paintings may be concerned with self and its relationship to the universe, there is a noticeable lack of people in these derelict spaces. Wong simply removed the presence of humans from his compositions, leaving only the remains of habitation which is relatable but ultimately disconnected from our reality by their lack of integration with the surrounding landscape.  Their isolation from each other imbues the picture plane with a profound sense of dislocation. The looming, unexplainable element of suspended objects generates an eerie atmosphere. Their incongruous presence and the lack of information about what will happen next can potentially fill the viewer with dread and uneasiness.  Wong’s disturbed inner state during their execution unconsciously permeates his compositions; the picture surface acting like a mirror reflecting the creator’s anxiety. Thus these landscapes are more metaphysical than tangible: a visual autobiography that contains dreams as well as fears. 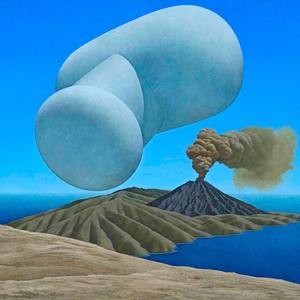 Stay up to date on Brent Wong news, exhibitions, new works and updates.

Visit our gallery store to shop limited edition prints by Brent Wong. Artworks can be purchased online from the store and for orders over $800 shipping is free.