Don Binney needs little introduction to art lovers – or the New Zealand public – so distinctive are his iconic paintings and drawings of birds and landforms. In a career spanning more than 40 years, his commitment to ornithology, environmental issues and spiritual connection with the land drove his art practice.

Binney was Head of Painting at the Elam School of Fine Arts in Auckland, retiring in 1998 after 24 years of teaching. He exhibited continuously from the 1960s until his death in September 2012, aged 72. After retiring, he continued to focus full time on his art, travelling extensively, especially within New Zealand and to places of spiritual significance internationally. From 2002, he worked increasingly in charcoal and colour pencil because of its portability and simply because he loved the intimacy of the medium.

His perspective on landforms was as distinctive as the symbolism of his stylised birds. After becoming identified primarily for capturing the essence of endemic and some introduced birds in his art, he set them aside for many years as he investigated other media – including photography and collage – and diverse subjects. In later years he discovered there were still concepts to explore through this combination of his deep knowledge of ornithology and his art, and in 1999 he began to produce new bird series – as sought after as the early images.

In her book New Zealand Art – A Modern Perspective, Elva Bett described Binney as a pivotal artist ‘of unusual sensitivity and insight’, with clear light and sharp definition creating linear patterns to structure his compositions. That was in 1986. Although his paintings remained sought after through the 1980s and 1990s, there was a strong resurgence in collector interest in his final decade of work, including the finely crafted pencil drawings he favoured for their portability and the potential to work directly in the landscape. He is regarded among the top half dozen most collectible names in New Zealand art. 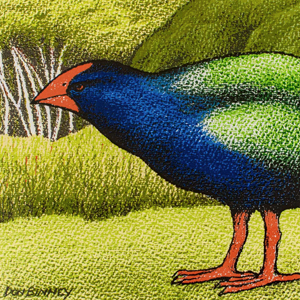 Stay up to date on Don Binney news, exhibitions, new works and updates.

Visit our gallery store to shop limited edition prints by Don Binney. Artworks can be purchased online from the store and for orders over $800 shipping is free.